Your support of the Animal Protective Foundation makes a difference in countless animal’s lives. Here are just a few of our most recent adoption successes that would not have been possible without you: 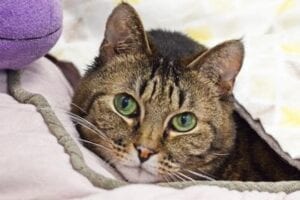 Burrito, a 4 year old female kitty came to us as stray. With a spicy personality and full of energy she lived up to her name. She became easily overstimulated and would swat to let us know she had enough but still begged for attention. Our staff worked with Burrito using Cat Pawsitive training to teach her things like “away” and “place” so she could walk away when she was done getting attention.

Shortly after her successful training Burrito was adopted, but unfortunately did not get along with her new feline sibling. She was returned to APF to find a better fit. It didn’t take long for another member of the community to be interested in Burrito. After extensive conversations with staff about her behavior and spiciness, Burrito was adopted again! Her new family appreciates her little attitude and Burrito is so happy in her fur-ever home. She has even turned into a lap cat! 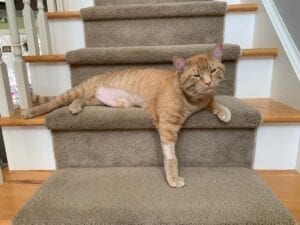 This handsome tomcat Todd, was brought in as a stray. When he first arrived, he was nervous and unsure of his new surroundings. During Todd’s initial exam our vet team found unknown wounds, so our feline friend had to be isolated in quarantine for 30-days. He still got plenty of love, attention, and floor time. When he returned to his cabana, staff noticed that through his friendly personality he was experiencing pain and discomfort – it was discovered that Todd had three large bladder stones. Poor little guy! Next on the docket was surgery to remove the stones.

During surgery Todd’s vitals were checked using a Pulse Oximeter. This machine helps our vet team with early detection of changes to a pet’s oxygen level and heart rate to prevent complications. All went smoothly and Todd went for a temporary stay at a foster home for recovery. Once available for adoption, this big, beautiful cat showed off his loving side and completely melted into purrs while in the arms of his new owners. It was love at first sight! 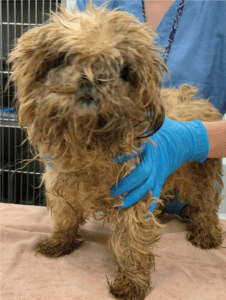 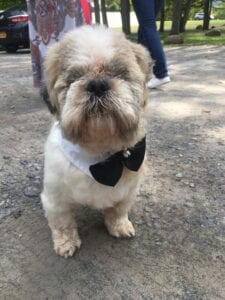 Ten year old Shih Tzu mix, Andrew, was transferred to APF from the Washington County Animal Control. Unkempt, no collar or chip, he was blind and deaf and brought in for evaluation and possible euthanasia.

After he was cleaned up and had his bloodwork run we found he was in good shape for an old guy, but needed serious medical attention including dental work. He had untreated dry eye that lead to blindness and pain; both eyes had to be removed. Extra funds were needed to cover Andy’s care.

While recovering Andrew was placed with a foster family, who ended up adopting him. He enjoys sleeping with his two canine brothers and according to his Mom, “Andy knows where his bed and food are. Most importantly, everywhere he goes in our home someone is there to happily give him lots of love and kisses. He cannot see or hear, but Andy truly listens with his heart.” 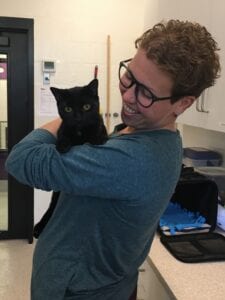 Spunky cat Spade came to APF as a stray who had a broken hind leg. At first he was nervous and vulnerable – it appeared he had been hit by a car. His hip joint was shattered and he was in a lot of pain and discomfort. It looked like his leg would have to be amputated.

After two surgeries and a long recovery time Spade’s leg was rehabilitated, thanks to in-house veterinarian Dr. Jackie Kucskar and the APF veterinary staff. Spade transformed from a shy, injured cat into a friendly, playful one during his time at the shelter. 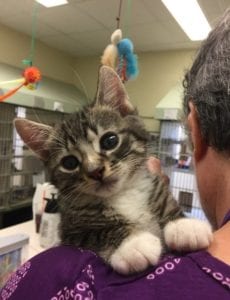 Ned was a 6-day-old tiny stray kitten who was brought to the APF. The tiger kitten was alone, afraid, and needed round-the-clock attention. An amazing foster mama agreed to take the small bundle of love home and bottled fed him and gave him tons of nurturing love. Ned grew stronger every day and loved to snuggle with his foster dog mates. Ned was with his foster mother for a couple of months and finally weighed enough to be neutered. He was given all his necessary vaccinations and was ready for adoption. A lovely woman came in and fell in love and now Ned is the king of his castle and has a wonderful forever family, complete with dogs to snuggle with.

It is donors like you who make it possible for us to go above and beyond for these precious animals. Please consider making a donation today. 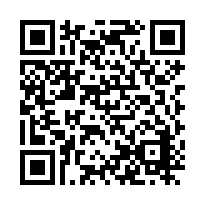 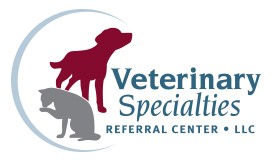 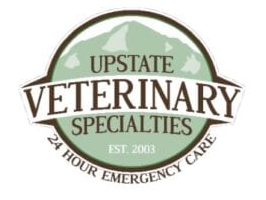 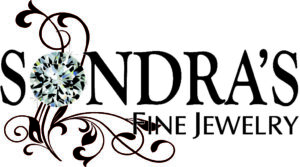 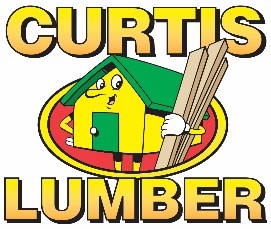 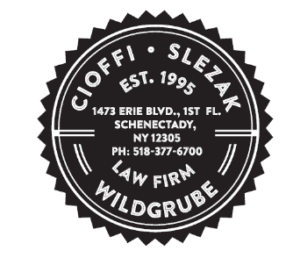 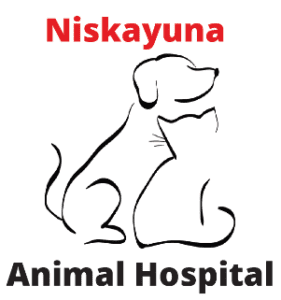 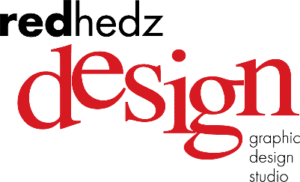